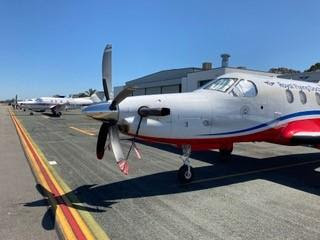 turboprop aircraft by transitioning its fleet to Hartzell’s 105-inch diameter five-blade composite propellers from Hartzell four-blade aluminum propellers.
RFDS Western Operations uses its aircraft for medical emergencies and patient transfers between medical facilities, over the last year traveling 8 million kilometers across Western Australia to reach 9,012 patients. The RFDS’ 24-hour aeromedical service retrieves patients from some of the most remote corners of Western Australia and their highly skilled pilots have experience landing on roads or dirt airstrips of all kinds.
“The Flying Doctor in Western Australia is delighted with the support received for this fleet conversion, from both West Coast Propeller, Hartzell’s Recommended Service Facility here in Western Australia, and from the Hartzell factory in the United States,” said RFDS Western Operations Managing Engineer Andy Lewis.
Total Fleet Conversion
“We are currently installing the five-blade Hartzell props on two of our aircraft at our 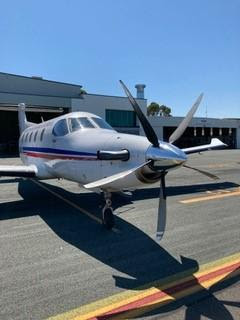 maintenance base in Jandakot, and are already flying three PC-12s with the five-blade propellers installed at the Pilatus factory. We have ordered three more props to date with intentions to eventually transition our entire fleet of 16 PC-12s,” he added.
“The new Hartzell propellers are lighter, stronger, require less maintenance, and provide more torque, which enables the aircraft to fly better and ultimately save on fuel.” He said the new propeller system will maximize aircraft performance and increase patient comfort with less vibration expected during flight.
“West Coast Propellers is exceedingly happy to help the RFDS and represent Hartzell Propeller with this five-blade upgrade that cost-effectively takes the PC-12 aircraft to the next level of performance, reliability, and comfort,” said Stephen Ashley of the company. “It is a privilege to be involved with such an exciting product, being put into play for the end-user.”
Multimillion-Dollar Investment in Composites
“We appreciate the confidence shown in our five-blade propeller by the RFDS and the cooperation and support of West Coast Propellers. The five-blade composite swept-tip props chosen by the RFDS are specially designed to maximize performance for the Pilatus PC-12,” said Hartzell Propeller President JJ Frigge. “The prop is a product of Hartzell’s multimillion-dollar investment in structural composites, advanced aerodynamics, and modern manufacturing processes.”
In addition to the 16 PC-12 turboprops, the RFDS Western Operations fleet also includes two Pilatus PC-24 Rio Tinto Life Flight Jets. Each aircraft is fully equipped with purpose-built aeromedical equipment and serve as Intensive Care Units in the sky. The service has five strategically located regional bases in Western Australia to ensure a far-reaching geographical impact and prompt aeromedical response.
About the Royal Flying Doctor Service
The Royal Flying Doctor Service is one of the largest and most comprehensive aeromedical organizations in the world, providing extensive primary health care and 24-hour emergency service to people that live, work and travel across the 7.69 million square kilometers of Australia. Established in 1928 by the Reverend John Flynn, the RFDS has grown to become the world’s largest and most comprehensive aeromedical organization. Healthcare services are delivered on a day-to-day basis by six RFDS operating sections – Central Operations, Queensland Section, South Eastern Section, Tasmania Section, Victoria Section, and Western Operations.
About West Coast Propellers
West Coast Propellers is entering its 30th year of operation. It is focused on core values of honesty, integrity, hard work, and the pursuit of excellence. West Coast Propellers strives to do the best for customers no matter what level of aviation they are in and being a small family run business permits a more direct and intimate interface with every customer. Ongoing OEM and in-house training, tooling development, and the desire to continually improve, along with providing a 24/7, 365 service, are some of the key drivers the company employs. Aviators from as far as 2,653 kms away utilize the company’s services, and the company services an area of over 2.5 million square kms.
News & New Products

It Takes a Village for...

It Takes a Village for this Piag...

It Takes a Village for t...